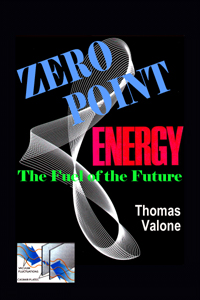 Tom Valone has written a superb introductory book for the reader who is seriously interested in "energy from the vacuum" but who is not a Ph.D. or practicing physical scientist. In this book he has given very important and clear explanations and meanings of fundamental terms, a digest of the technical efforts that have proven EFTV to be real, and many technical references for those who wish to probe even deeper.
With the present seriously escalating energy crisis (oil just hit $88 a barrel as I write this review), even the most nonchalant among us now is beginning to appreciate the catastrophic economic collapse that awaits much of the Western world if we do not dramatically reduce our dependence on oil, coal, nuclear power, etc. and if we do not find another inexhaustible and ubiquitous source of the electrical energy we need and must have, in a modern economy.
Valone has long been one of the leaders in the growing movement to point out that we already know in modern physics that the active vacuum has enormous energy density, is ubiquitous, and that it also interacts vigorously and continuously with every charge in every circuit and system. Indeed, if we rigorously apply the findings of broken symmetry since the proof of it in Feb. 1957, and since the prompt award in Dec. 1957 of the Nobel Prize to Lee and Yang for having predicted it, then we can show that all EM energy in every circuit and system already comes from the seething vacuum -- specifically from the broken symmetry of any dipolarity (which includes a single "isolated" charge and its polarized surrounding vacuum, as well as any "ordinary dipole").
Valone makes the background of this entire area available to the seriously interested researcher, without the researcher first having to have an advanced degree in physics. If we are to resolve the escalating energy crisis and survive with an intact national economy, such a book has long been absolutely essential. And Valone's book fills this void very admirably. We would only suggest that a future Valone book also address the issue of the long-neglected "source charge problem", where every charge continually and steadily emits real photons (real EM energy) in all directions. The emission is measurable and observable, but no instrument known to man can detect any observable input of the required energy to the isolated charge. However, the revolutionary 1957 broken symmetry discovery by Lee and Yang reveals the underlying input energy exactly where Valone is addressing attention: In any broken symmetry -- such as that of a classical charge and its associated and interacting polarized virtual state vacuum -- "something formerly virtual has become observable". In short, as Valone's work is leading up to, the charge already absorbs virtual (subquantal) photon energy from the vacuum, coheres and integrates it in increasing virtual excitation of the mass-energy of the charge to observable magnitude, then re-emits the now-observable energy as a real emitted photon radiated away at light speed. The process iterates continually, so that we already have the "magical vacuum energy extractors" to take energy from the vacuum -- the freely working extractors are already normal "classical" charges when their vacuum interaction is included as in modern quantum field theory (but absent from electrical engineering since 1892). Hence the dramatic importance of Valone's work in explaining a host of modern quantum physics and quantum field theory to "get at" and press into use the energy already freely being obtained from the vacuum. Illuminating "insight" books such as this book by Valone will lead to increased interest by our sharp young doctoral candidates and post doctoral scientists. Once sufficient scientific attention and effort is focused on the EFTV area by them, then very shortly there will never again be an energy crisis anywhere. We will then be powering everything directly from the ubiquitous energetic vacuum, cleanly and cheaply, and eliminating most of the manmade harmful emissions now so polluting to our fragile environment and speeding us into global warming. So Valone's book is a true pioneering tome for helping the entire world get into this coming and final solution to the energy problem, the present problem of despoiling the environment, and the present problem of human contributions to escalating global warming. I personally recommend this book most highly to all those who are sincerely interested in cleaning up the energy we use, getting off "big oil and coal" and "big nuclear power", cleaning up the biosphere, and dramatically reducing Man's present contribution to global warming. We have only a precious planet and a fragile biosphere -- and an entire human species -- to save, and Valone's book plays a very important contribution to pursuing that noble goal.
Thomas E. Bearden
October 16, 2007