Review of THE FOURTH INTERNATIONAL CONFERENCE ON FUTURE ENERGY

The Fourth Conference on Future Energy was held on March 15-17, at the of , , in the area.  This year, we joined the Institute for Advanced Studies in the Space, Propulsion & Energy Sciences (IAS-SPES) and featured 70 speakers who presented peer reviewed papers which covered of a wide array of new-energy technologies,  emerging renewables, advanced future energy concepts, fusion options, advanced propulsion concepts  and bioelectromagnetics. This conference was educational, entertaining and useful to all attendees, which included government, military, academic delegates as well as energy scientists, entrepreneurs and inventors from all over the world. 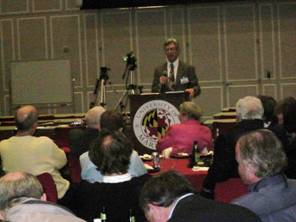 Integrity Research Institute (IRI) has the trademark tradition of presenting the best and latest energy discoveries whether in the technical, environmental, space and human health areas. These are the hallmark of our conferences and all of us at IRI were very happy to host our The Fourth International Conference on Future Energy (COFE4) which provided the latest developments on Energy, Propulsion and Bioenergetics with superb speakers together who traveled far and wide to attend. Our venue was the beautiful at the top-rated using several rooms for our speakers and exhibitors to present their latest findings. The speakers included an impressive list from many disciplines and areas such as:  NASA Propulsion and Space scientists, Department of Energy scientist, University professors from many other countries as well as US, and private entrepreneurs.

The morning of the first day was opened with presentations from our Plenary Speakers. The first section named New Era in Space Research and Technology was moderated by NASA engineer Glen Robertson and featured ground breaking presentations by two speakers from the NASA headquarters: Jay Falker on “NASA innovative Advanced Concepts” and Harry Partridge on “NASA Game Changing Technology” and followed by a presentation by David Froning on “Example of Advanced Concept Technology in Australia”.  Then the second portion was moderated by Dr Thomas Valone,

of IRI and included an amazing presentation on “Ion Conductive Material from Terrestrial Energy Conversion and Storage for Space Utilization and Life Support” by Dr. Eric Wachsman, Director of UMERC and Crentz Centennial Chair in Energy Research at the University of Maryland and followed by MS-candidate Scott Kelsey from Missouri State University’s breakthrough presentation on “Qualification and Quantification of Telomeric Elongation due to EM Resonance Exposure” which has enormous implications for advancement in aging mitigation and disease, since human DNA telomeres normally shorten with age. Scott works in association with the groundbreaking inventions of Norm Shealy, MD, PhD, neurosurgeon and inventor of the TENS Unit and author of Life Beyond 100: Secrets of the Fountain of Youth, (Jeremy Tarcher, 2005).

Tuesday afternoon followed with a forum chaired by James Woodward of entitled Frontiers in Propulsion Science Experimental Results and included a presentation by Alexander Martins, Mario Pinheiro, on “The Nature of Propulsive Force of Asymmetric Capacitors in the Atmosphere”, which was particularly interesting since it related directly to the T. Townsend Brown experiments in the IRI book, Electrogravitics Systems, edited by T. Valone. The session also included an outstanding theoretical presentation by Dr Terence Barrett and David Froning entitled “New Directions in Electromagnetism for Propulsion and Power” which identified the benefits of toroidal coils for vacuum modification and two presentations on Mach effects by Dr Woodward and Nembo Buldrini. This was followed by a forum entitled Advances in Contemporary Propulsion Sciences and Advanced Technologies, Concepts and Techniques for Space Application chaired by John Cole and Chuck Suchomel, USAF WPAFB Ohio, that included a presentation on “Hydrogen Storage Methods for 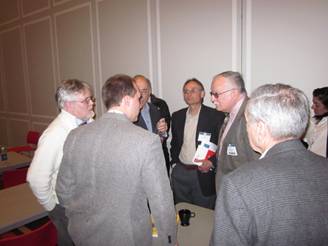 Microthrusters  by Dr George Miley, from  the University of Illinois in Champlain, an past IRI award recipient of the “Integrity in Research Award”  and “Vasimr Human Mission to Mars” by Dr Chang Diaz and Andrew Illin.  Ending the day was the much anticipated presentation of the entire conference by engineer and physicist, Paul Murad with coauthors, Morgan Boardman and John Brandenburg on: “The Morningstar Energy Box”,  a replication of the mysterious John Searl and Russian magnetic energy converter (MEC) device of Godin and Roschin.  It was an historic occasion since Mr. Sergei Godin came from with his financial backer Mr. Kruglak just for the breakthrough announcement by Murad that the anomalous “magnetic walls” and the “temperature cooling zones” surrounding the MEC were independently confirmed and measured! Paul also showed two videos of the spinning device to highlight his findings that for the first time, validates the work by Godin and Roschin, who also hold a patent on the device.  The room was filled to the max as the audience listened attentively to Paul Murad and a lively question and answered followed. It was a most fitting way to close the first day.

Wednesday morning opened with a forum chaired by Dr Valone and Len Danczyk of Energetics Technologies on Solar and Space Solar Power which included: “Terrestrial Micro Renewable Energy Application of Solar Technology” by Dr Narayanan Komerath, who showed amazing simple applications in third world countries of solar energy, including solar roof ovens and solar stoves in . He emphasized the fact that education of these new technologies to the public is essential and necessary for their success. This presentation was followed by Paul Jaffe’s “ Module Development of Space Solar Power” with a novel way of producing solar energy. Concurrent to these forums ran the Frontiers in Propulsion Science, Theories, Models and Concepts forum that included presentations: “Vortex Formations in the Wake of Dark Matter Propulsion by Robertson and Pinheiro  and “The Chameleon Hypothesis and Prospects for Novel Forms of Energy Generation” by Don Reed, showcasing this novel Chameleon hypothesis which was also referred to by other speakers. Also presented was a lecture on “Reverse Engineering of Podkletnov’s Experiments” by Ben Solomon who showed admitted anomalies by NASA regarding the spinning superconductor experiment, and also a talk on “A Matter of Definition” by Greg Volk, outlining key points on advanced Propulsion science and “Progress in Antigravity Mechanism using Rotating Masses” by Chris Provatidis from Greece, whose presentation including work by Dr Paul LaViolette, former IRI board member and author of the bestselling book: Secrets of Antigravity Propulsion (Bear & Co., 2008).

The rest of the morning included a packed forum on Advanced Nuclear Energy with presentations by Liviu Popa Simil, Dr George Miley, Andrew Muelenberg, and many others. 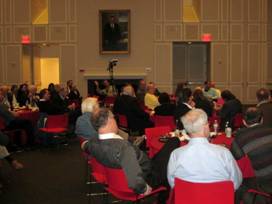 The afternoon continued with the forum: Space and 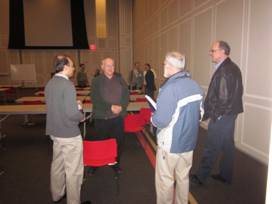 Society: a Cultural History of Space Age 1900-2009 was chaired by Theodore Swanson of NASA Goddard Space Flight Center in and Bob Zimmerman.  Presentations included: “Space Exploration: The Dream Of The First Half Century Vs. The Reality Of The Second Half” by Bob Zimmerman, “The Death of Rocket Science in the 21st Century” by Glen Robertson and Daryl Webb, “How we Remember Apollo” by Dr Launius and “Identifying Sociological Factors for the Success of Space Exploration” by Charles Lundquist, all which gave valuable historical facts that we will need to build upon for future Space Programs.  Closing the afternoon was the forum Other Future Energy Sources, which  highlighted several future energy sources such as  “A Hyper-Efficient Inverter driven by Positive EMF in Combination with aTransient Phenomenon” by Osamu Ide of Japan,  “The Flow of Energy” by Frank Znidarsic, and prior COFE speaker in 1999 Dave Goodwin from the Department of Energy, who gave a informative presentation on  resources both intellectual and financial at the DOE, as well as a groundbreaking presentation by Moray King “Water Electrolyzers and Zero Point Energy. An interesting follow-up to Terence Barrett’s presentation was the “Electromagnetic Radiation Experiments with Transmitting Contra Wound Toroidal Coils by Dave Froning. This was followed by our German friend and colleague, Dr Thorsten Ludwig on the Hans Coler device, which included Dr Ludwig’s current measurements and experiments.  IRI has been selling the British Intelligence 1946 report on Hans Coler‘s device “The Invention of Hans Coler” (#504) for over 10 years and it is always in demand as an insight into an alternative energy device that even credits the “Barkhausen Effect” for its energy production. Dr Ludwig’s paper was a great research project that also involved student construction of the full scale circuit. 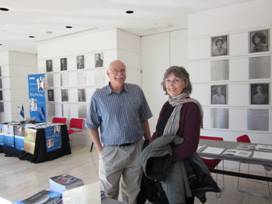 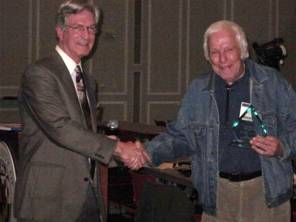 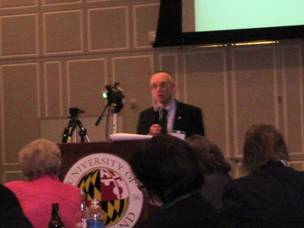 After a full day of presentations, all attendees looked forward to our Evening Banquet event, which included the IRI annual awards ceremony.  This year the recipient of the “Integrity in Research Award” went to David Froning, whose pioneering work on “vacuum engineering” with electromagnetism for propulsion and power using contra-wound toroidal coils has made groundbreaking finds which have long range implications for space travel and gravity modification (his paper in the COFE3 Proceedings is a good summary of his life’s work).  IRI wished to recognize the hard work that David Froning has done for years to bring scientific integrity to engineering of the vacuum, which is one of the most challenging projects any physicist can undertake.  Following the award ceremony was our special banquet speaker and former COFE2 speaker, Dr Dennis Bushnell, Chief Scientist at . His amazing talk entitled “The Frontiers of Energetics and Space Propulsion” was filled with validations of many theories and hypothesis that IRI has supported for the past 10 years, including acknowledgement of zero point energy utilization and LENR, with the latest Rossi Experiments. He further recognized that the basis for space utilization and exploration is energetics and stated that we have reached the plateau of chemical propulsion and must move beyond them, looking at a large and growing number of options seriously to be studied and triaged to determine their performance abilities, possibilities, operability, costs and safety. All of them require investment and evaluation by his group at
NASA to implement them at large.

The following and last day of our conference started with the forum Enabling Technologies for Surface Science, chaired by NASA Greenbelt director, Pamela Clark.  It included presentations on Robotics, Cold Temperature Packages. The most amazing presentation without a paper was by P J Piper from QM Power, which is marketing the breakthrough work by Joe Flynn on “parallel path” magnetic motor designs that save energy by doubling the flux and creating four times the power delivery. Mr Piper stated that most motors on the market run at 20% or less where the Flynn motor design delivers over 90% efficiency! The companies that are onboard with www.QMPower.com include and many others. This motor and generator design is destined to replace all existing single path motors on the market today. 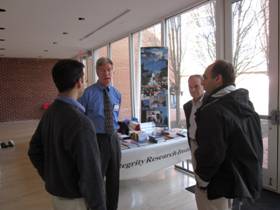 Concurrently with the forum was the Unconventional Physical Principles and Gravitational Models, was chaired by Paul Murad and John Brandenburg of Orbitec.  Talks included:  “Progress on the GEM Theory”, “Experiments in Synchronicity” by Shelley Thompson and “Replication of Pulsar Behaviors to Create Space Propulsion”. The last forum of the conference was Transformational Technologies to Expedite Space Access and Development, was chaired by John Rather and James Powell of Maglev 2000 LLC.  Presentations on “Maglev Launch systems and a Test Program for the Magnetically Inflated Cable for Large space Structure System” among others was presented.

All who attended COFE4 carried back with them the latest and most invaluable information on Energy, Propulsion and Bioenergetics, including the Proceedings CD, recorded DVD presentations by Lost Arts Media  with all the papers presented at the conference, and a collection of fond memories, fellowship and stimulating intellectual and scientific exchanges. 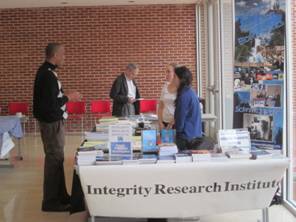 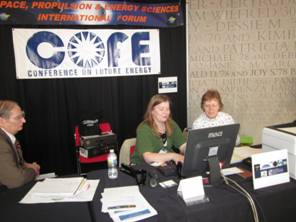 We want to thank all our sponsors, Global Gateway Foundation, Arcos Cielos Research Foundation, iRenew Corp and an anonymous donor for their financial help and support and special thanks to our co-hosts from IAS-SPES, Glen Roberston and Melissa Lee.

Most of all we want to deeply thank all our volunteers who helped in many ways, including transporting presenters,  assisting attendees,  the IRI booth service and many other tasks too numerous to mention.  Special thanks to: Jim Newburn, Zoe and Carina Slepian, Elaine Chen, Hamilton Smith, Elizabeth  THANK YOU!